Bibi Netyanyahu May Have Just Blinked in the Face of US Opposition, Almost Guaranteeing an Iranian Bomb

After listening to Bibi's speech at the UN General Assembly, I can't help but have the sense that he just backed down and now Iran is all but guaranteed nuclear power status.  The reason I say this is because he mentioned that the "red line" of Iran getting enough enriched uranium to make that final push for a bomb won't hit until the spring of 2013, and his public announcement of this fact seems to take an Israeli attack off the table until then.

Unfortunately, the real red line for Israel is the point at which it can no longer delay or destroy Iran's nuclear program, which is probably far sooner than next spring given its military capabilities.  Every day that Iran's program is unmolested is another day you give the Iranians time to both reinforce the nuclear facilities already in place as well as build new ones.  As Bibi mentioned himself, Iran is the size of half of Europe and so it's hard to find these facilities and intelligence services missed one operating nuclear facility for a full two years.  Why give them a chance to put even more redudancies into the system?

Another issue, and this could be pretty major, is that his spring of 2013 timeline may be way too optimistic for the data of an Iranian nuclear breakout.  As you can see from the chart below (taken from this great report from AEI), several estimates point to Iran crossing the red line between September 24th (which is already in the past if you look at the calendar) and early February 2013 at the very very latest: 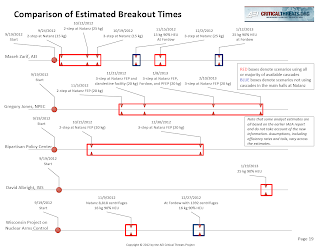 And here is some detail from AEI on its own estimates which is based on what we currently know about Iranian centrifuge capacity, assuming no hidden plants somewhere: 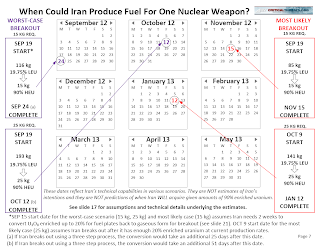 As you can see, the most likely point at which Iran has a breakout is actually months before Bibi's red line.  And given the fact there is a lot more cloud cover in the middle east in the winter, if Israel doesn't attack in October, they might never have a chance to actually stop Iran's nuclear program.  Bibi's announcement of a spring redline was essentially his public acquiescence to Obama's wishes of no attack before the election.

Even if you assume that Bibi's redline is correct and Iran is still about 6 months away from their nuclear breakout, there is no reason to believe the United States will do anything to stop Iran next year.  Let's just look at the history of the US with regards to nuclear proliferation.  The US was concerned about the Iraqi Osirak nuclear facility in the early 1980's but did nothing about them and even condemned Israel when they did something (though Dick Cheney did thank the Israeli's for doing so 10 years later during the first Gulf War).  Then what about the Syrian nuclear facility?  After a lot of back and forth being Israel and the George W. Bush administration, Israel bombed it as they couldn't wait any longer for the Bush administration to get on board.  In North Korea, there are reports that Clinton was ready to go to war to destroy their nuclear facilities but then agreed to a deal at the last moment.  A deal that North Korea clearly broke as they now have nuclear weapons.  The US also did nothing to prevent Pakistan or India from crossing the nuclear threshold.  Time after time, the US has done nothing to prevent nuclear proliferation when push came to shove. If President's like Reagan, George W. Bush and Clinton were unwilling to act why would you think Obama will (given that he won't have another election) or Romney will?  Romney might have a higher chance of cooperating next year than Obama but he will probably want to focus on fixing our economy and our budget and won't want a war on his hands so soon after his election.

The best hope for destroying or severely delaying the Iranian nuclear program is by attacking now, when Israel is still capable of doing meaningful damage and when the United States will be forced to back them up (as any failure to do so will cost Obama the election).

Of course, I know that Bibi is a smart man and he may have purposely made it seem that he wasn't in a rush to attack in order for Iran to put its guard down (it seems stupid to attack when you keep telling your enemy you are about to attack) but I'm not so sure.  He just may have been bluffing this whole time, hurting Israeli prestige and the future of the nation itself in the process.

Posted by libertarian neocon at 3:13 PM 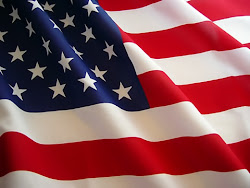 Blogs I Love to Read

libertarian neocon
Just a suburban dad who thinks people should be treated like adults, government should be small and our foreign policy should be strong. Email me at libertarianneocon@gmail.com